Written by Giles Houghton-Clarke, President of the Board

Update on school capacity and infrastructure.

The Steering Committee overseeing school capacity in Brussels met on 12 March to review. The following topics were discussed:

The Regie des Batiments (RdB – Belgian agency responsible for providing and maintaining European Schools buildings in Brussels) confirmed that final permits are all to be received very shortly. The project remains three weeks behind schedule but there is confidence this can be recovered. Work has already started on the site, with clearance of the ground and other preparations. As of end March the modules from which the school is to be built will start to arrive. The Head of Cabinet for the Belgian government has assured that the Ministry of Justice is well aware of the school being close to the terrorism trials and has stated all necessary security measures will be taken. We await further details. In June there will be a period of high security due to the trial. The RdB is inviting both the local police and security officers from Commission to attend to review how the school security arrangements will function. 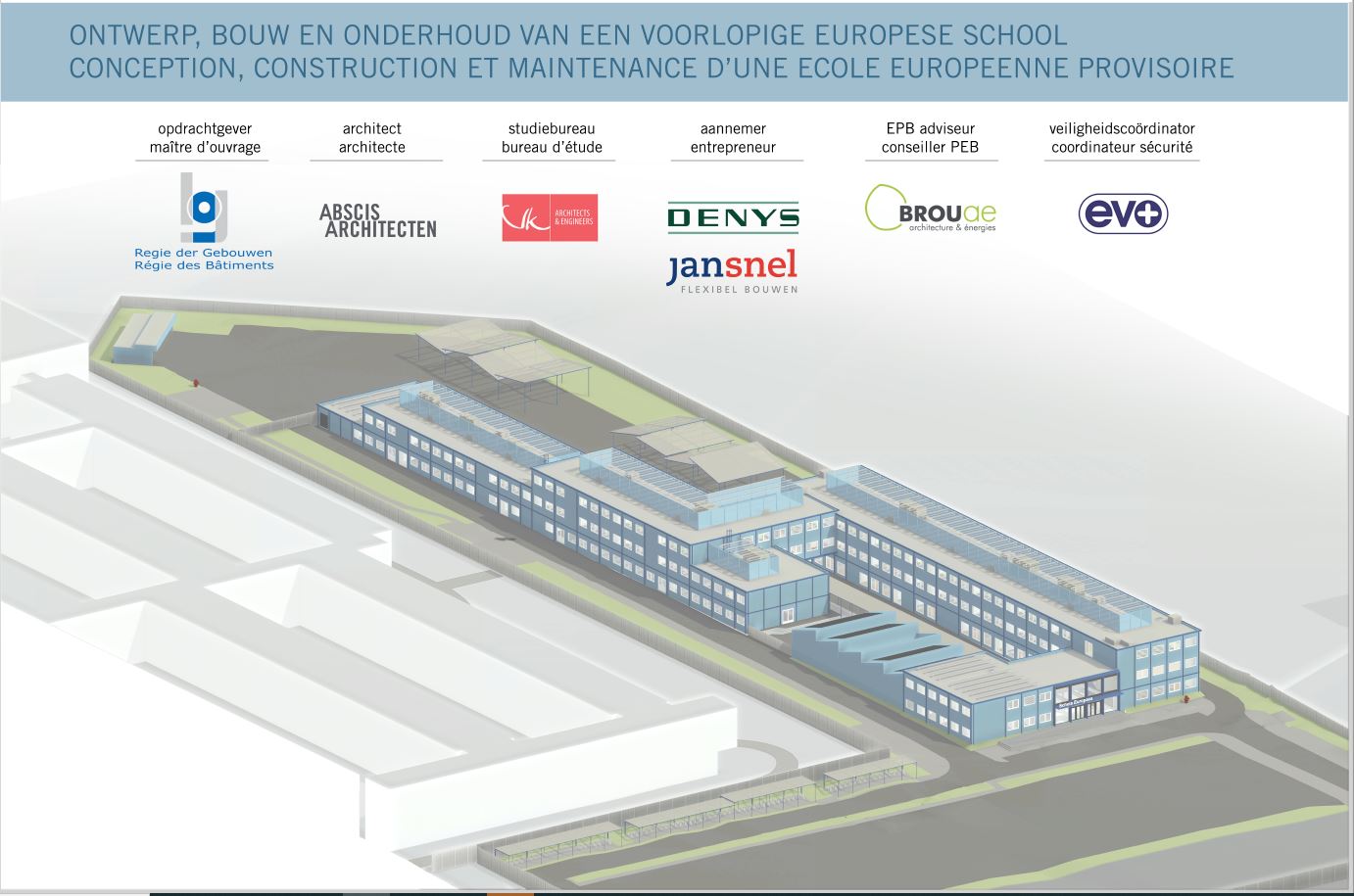 Contingency planning in case there are delays to project was not discussed in the meeting – a special meeting will be convened in April to for this. The APEEE remains very concerned that as yet there are no clear contingency plans, having first raised the need for such planning back in November.

The students representatives gave their views on potential contingency plans – ruling out the use of the far-away Mol school and proposing that ideally more space be found locally (but not in the existing schools). The APEEEs raised the possibility of using OIB centres in Philip le Bon and Palmerson as temporary location, as proposed by the Local Staff Committee representing the Commission workers.

The Belgian government taskforce on the European schools has requested a 10 year plan setting out the needs for schooling in Brussels. They would like this to include 3 scenarios; with the 5th school, in addition with Berkendael school and finally with in addition both Berkendael and Evere as permanent schools. The Office of the Secretary General is working on preparing this plan. The APEEEs requested that the baseline for the plan should be the school capacity levels defined for each school, i.e. 2850 for Woluwe, not the actual situation at present, which is very overcrowded. Student representatives were emphatic in pointing to the harm the current levels of overcrowding were inflicting on the student population in terms of mental health, wellbeing and physical safety.

We asked about the plans for housing the excess pupil numbers before 2028, when the 5th school is hoped to be delivered. We also raised the need for secondary infrastructure at least in EEB1 & 2 to accommodate the growth of the secondary schools on these sites with their now expanded primary schools. We were informed that the taskforce is aware of these issues and will address them once the scenarios are received. These decisions will need to be taken in the context of whether Berkendael and Evere remain European schools after the 5th school is completed, or are handed back to the Belgian government, as is the current agreement. In fact it is impossible to conceive of not continuing to have these schools given the level of pupil numbers vs school places, but this is a decision that has to be formally taken by the Belgian authorities.

A discussion was held in this context as to whether the growth of the Brussels school population by 400-500 pupils per year could expect to continue. The representative of the Belgian Government referred to the likely cause being changes to the rules in the Belgian school system which have taken away parental choice in which school their children attend. Many families who have the right to a place at a European school but have kept their children in the Belgium system are therefore now transferring to the European schools. We learnt that the proportion of families using the European schools has increased from 40% to 55% of those who are eligible. Given the strains in the Belgium system, it is foreseen that this trend will continue, so further growth is expected. The Commission added that there was no way of stopping these transfers as the parents had a right to use the European schools as part of their employment contract.

The 5th school, now known as ‘Haren’ remains targeted for delivery in 2028. The Secretary General is of the view that it should be designated as a Secondary only site, and has requested feedback from the meeting. With Evere and Berkendael adding Maternelle and Primary capacity, it is now Secondary places that are needed.  The APEEEs were not able to take a position on this as no plan has been presented on how it would be populated, how small multi school sections (DE, NL and EN) would be impacted and in particular what relationship it would have to the Evere Primary school.

The RdB has been under pressure from all Brussels schools because it is late with many key maintenance and other infrastructure projects. Some of these have been delayed many years. The RdB stated it will validate with the schools the prioritisation list for these projects, however it was made clear that none of these will start until 2022. For Woluwe this includes addressing the overheating situation in the Primary building, where temperatures in the warmer months rise above the maximum permitted levels creating an intolerable situation in many classrooms. This project has been outstanding for a number of years. It was to have been addressed last year using internal budgets but was stopped by the Commission, who wished to avid schools’ budgets being used for infrastructure issues. We protested that once again this project, which has the full support of the School Admin Board and the Office of the Secretary General, has been delayed. We will be contacting the Commission to understand how they intend to ensure that teachers and staff do not need to suffer again this summer.

We were informed that if RdB is to address these other infrastructure issues now it will take attention away the attention of our designated representative from Evere, with the risk that Evere will be delayed. The APEEEs are of the view that as the RdB is an organisation of 822 employees, responsible for some 967 buildings across Belgium., it surely has more manpower to bring to the European schools; the question is simply whether European schools are sufficiently high on the priority list.

The APEEEs hope that the Commission and the Office of the Secretary General will be able to ensure this happens.